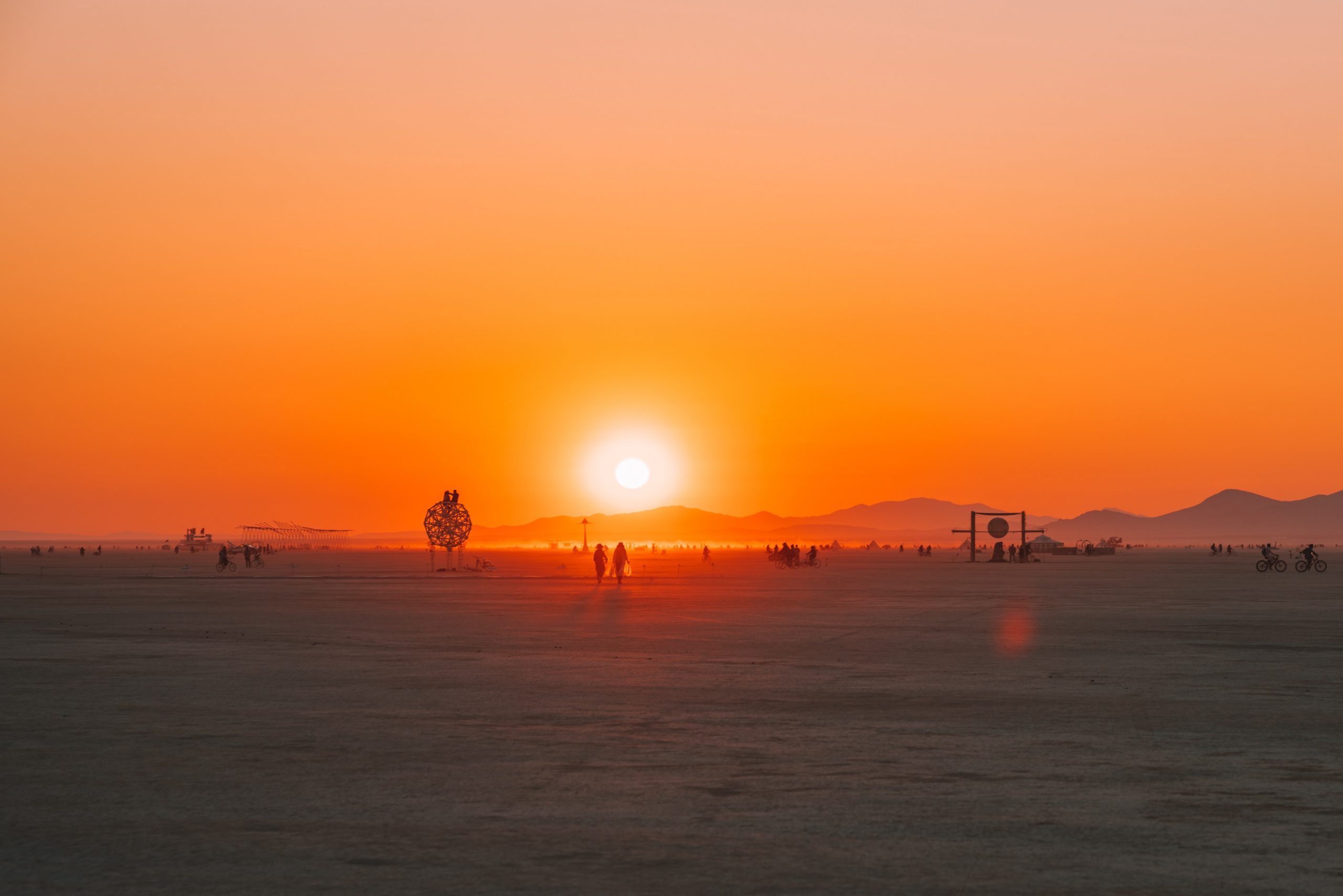 Looking at the familiar in an unfamiliar way is how the future is built.

The world is broken. Record unemployment, a global pandemic, and climate change fueled by social inequality and unchecked capitalism are rapidly degrading the quality of life for billions of human beings. The list goes on and on. The vision required to solve these problems, however, may have begun in an unlikely place some 30 years ago in the remote southern end of Nevada’s Black Rock Desert.

Burning Man, which began as a cozy, intimate bonfire on the beach for artists and freethinkers, has grown into an international experimental and experiential movement. Participants, called “Burners,” arrive in the desert by the tens of thousands to construct the festival’s Black Rock City, a temporary settlement dedicated to art, community, self-expression, and self-reliance. Reinvention is the prevailing theme of Burning Man and one that the world needs now more than ever.

“A global quantum kaleidoscope of possibility.”

Since its inception in 1998, Burners have struggled to communicate the formidable but nuanced meaning of the week-long festival. Despite Burning Man’s reputation for being “out there” and unbridled and artsy, its deeper framework is entrenched in the ideas of discipline, transformation, balance, and survival in extreme conditions. The Burning Man organization describes itself as “a global quantum kaleidoscope of possibility.” Though that generalized characterization may seem aloof for people unfamiliar with Burning Man, it speaks directly to those familiar with the spiritual and transcendent power generated annually in the Black Rock Desert. While the long-standing event did not take place in 2020 due to the pandemic, its principles may be the ‘vaccine’ we need to cure corporate America.

Burning Man’s “kaleidoscope of possibility” is actually built upon ten guiding principles. For business leaders in the corporate world, five of these principles offer immediate strategies that can address both existential business challenges and larger societal problems that are undermining the global economy and civil discourse.

Radical inclusion addresses systemic racism and its tragic and continuing impact on our culture and economy. At Burning Man everyone is welcome. The inclusive environment attracts and celebrates people from a vast myriad of backgrounds and experiences. This principle compels different people to work together harmoniously for the greater collective good. Corporate America, by contrast, is failing to prioritize and implement inclusion and diversity initiatives. In fact, a 2020 Hired.com report reveals that the gender gap is widening in corporations, with men being offered higher salaries than women for the same job title at the same company 63% of the time, compared to 60% in 2019.

Employing a diversity of perspectives is key to being able to compete in a hyper-competitive and hyper-connected global economy. At Burning Man, the assimilation of original ideas and unique talents has generated an unprecedented creative force in human culture. Businesses should learn from this unparalleled synergy of value, especially during such challenging times. Women and people of color continue to be disproportionately oppressed and disenfranchised from opportunity. Long-existing attitudes and practices built on racism and cultural bias still shape corporate policies and encourage discriminatory practices which are particularly harmful in the era of COVID-19.The tech industry – which has a history of white male bias – and its juggernaut companies such as Facebook and Google should reimagine their imbalanced workforces to promote and prioritize inclusion and diversity.

Burning Man is a commerce-free zone. Coffee and ice are the only commodities that can be sold and there is no buying or selling with money. Also, there are no vendor stands or advertisements like at other festivals. Even logos are taboo. While there are indeed makeshift bars, sandwich shops, and hair washing stations, these are offered by fellow Burners as gifts. It may seem impossible to picture businesses operating in such an environment, but gifting is an important and powerful part of the human experience, harkening back to a time where people didn’t have bank accounts or currency. It’s in our DNA.

Through gifting, we create shared respect, set a healthy tone, build mutual trust, express gratitude, initiate conversations, and grow relationships. But gifting also gives people – and all businesses are composed of people – a chance to tell unique stories. Gifting helps us think about what is needed to thrive together, and what gifts we have to offer to the world. Through gifting, we explore and discover talents and passions in ways we wouldn’t otherwise imagine. While no one is advocating for the elimination of currency and commerce, imagine a world where business leaders – guided by purpose and empathy – make giving back a top priority. That is a world, and economy, you want your children to inherit.

Leaving no trace behind – cleaning up everything after the festival – is arguably Burning Man’s most important principle. There is no garbage collection service in Black Rock City, so the onus is on Burners to remove all items, regardless of size. Environmental stewardship as a lifestyle is poignantly relevant today as we fight climate change, a spreading pandemic, raging wildfires and rising sea levels. Our environment, in fact, even plays a critical role in how resistant people are to the spread of COVID-19, with more scientific evidence linking pollution to infectious diseases.

Studies also indicate that during times of crisis and solitude, people develop a stronger connection to the beauty and energy of their natural surroundings. A prolonged economic recession could exacerbate environmental degradation as companies divert habitat-centered resources and abandon environmentally conscious practices. Forward-thinking business leaders should appreciate the importance of supporting a sustainability mindset throughout corporate cultures and processes to ensure long-term success.

To end the movement’s first gathering at San Francisco’s Baker Beach, the founders burned an eight-foot tall figure, prompting the eponym Burning Man. This act of “radical self-expression” marked the beginnings of the annual Burning Man festival, and visually depicted the festival’s recurring theme of starting over and reinventing yourself and the world around you. Burning Man’s principle of radical self-expression empowers people to rely upon the resources inside themselves – within the context of the movement’s other principles, such as gifting to the community.

Burning Man’s principle of “immediacy” translates into an unspecified expectation that attendees will free themselves of their mobile devices so they can live fully in the moment. During COVID-19, digital connectivity is at an all-time high. Consequently, data shows that remote workers are clocking an additional 60 hours a month as a result of COVID-19; as a result, stress levels are mounting and severely compromising mental health, emotional well-being, and overall productivity levels.

Time is our most precious resource. Digital devices and technologies, rather than creating more free time for people to explore and grow, are actually commodifying and monopolizing our time. Savvy business leaders who recognize the value of Burning Man’s principle of immediacy can implement policies that foster greater “presence” in the workplace. This vision encourages workers to maintain a holistic work-life balance, eliminate unnecessary distractions, and ensure greater productivity in the long-term. This reinvention will also allow their employees to harness digital advancements in ways that free up our time, not consume more of it.

Sometimes freedom begins with looking inward and freeing ourselves from what we consider normal.